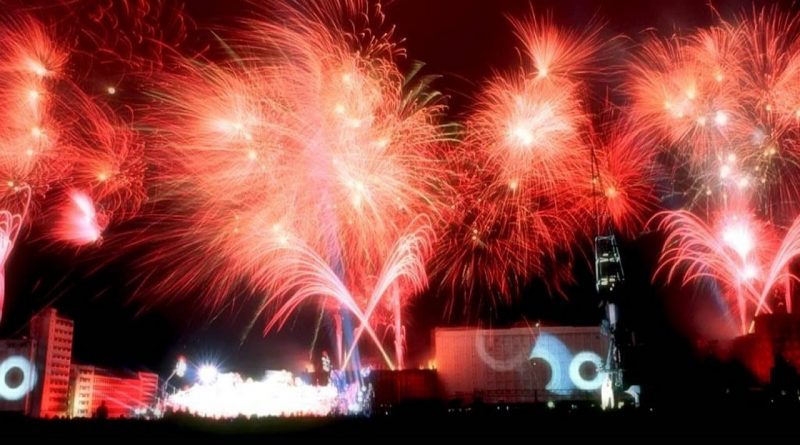 Thirty years ago today, I went to my first open-air concert.

I could scarcely believe my eyes when an advert in the local paper from a ticketing company (the Stratford Ticket Shop – I wonder what happened to them?) showed tickets available for a British show by Jean-Michel Jarre. A diehard Jarre fan by this time, I had almost resigned myself to the idea that Jarre would never stage one of his extravagant open-air shows in the UK. I had watched footage of shows in Houston, Lyon and the more modest but still spectacular indoor shows Jarre had staged in China in the early 80s and marvelled at them, but it seemed too much to hope for that a musician from another country who didn’t really tour in the traditional sense would come to the UK. So the idea that he would play a huge show in London was tremendously exciting. I told my friend Ian – about as Jarre-crazed as I was – and badgered my folks constantly about it until they agreed we could go. We bought our tickets – for the princely sum of £12.50 including VAT, plus an additional £10 or so for the coach ride to and from the concert site, all organised by the Stratford Ticket Shop, bless ’em – and sat back in anticipation.

Jarre initially wanted to stage a one-off spectacular in the style of the extravagant, record-breaking outdoor shows he had mounted in 1986 in Houston and his home city of Lyon – the former in celebration of the 100th anniversary of the Lone Star state, the latter in celebration of Pope John Paul II’s visit. Jarre spent months in negotiation with the local council, sponsors, musicians, an array of creatives, and a small army of technicians and riggers who were already building an enormous floating stage and setting up the on-site infrastracture. Finally, September 24th 1988 was fixed as the date of the concert, entitled Destination Docklands. Time passed. Jarre’s new album, Revolutions, was released in August 1988 and was performing well…

And then the local council, Newham, pulled the plug, citing health and safety concerns. The video below, put together by long-time Jarre collaborator Mike Mansfield, speaks of these testing times far more eloquently than I ever could. Finally, though, the council capitulated, and Jarre’s doggedness paid off – he was able to stage not one, but two shows, in London’s Victoria Docks on Saturday 8th October and Sunday 9th October 1988.

Although I’d already been to a handful of concerts, this was something different. This was in London, and I was to be unchaperoned, except by my friend Ian – we were being trusted to travel to the capital on our own and do our own thing. It was also outdoors. These things lent the whole event a different feel. The amount of publicity around Jarre’s struggle to mount the shows meant that almost everyone we had spoken to over the period between buying the tickets and getting on that coach early on the morning of the 8th October knew all about the show. When we climbed onto that coach, we almost felt like we were taking a victory lap, as if we’d personally stuck it to The Man ourselves. Stop us seeing Jean-Michel Jarre, eh? Ha! Fat chance, mate.

When we reached London and parked up, we were dismayed to see that the queue for access to the concert site was astoundingly long. It ran for blocks and blocks, and I seem to remember we stood in that queue for an hour or more before it really started moving. Happily, the security gates were so well staffed – no doubt a reaction to the health and safety concerns that had led to the original one-off show being cancelled by Newham council – that once the queue started moving, it didn’t take us too long to get inside, although it was quite a trek. The sheer size of the Victoria Docks was hugely impressive, but all eyes were on the enormous floating stage that sat like an enormous starship bridge set in front of the space set aside for the audience (seated and standing). It was crawling with technicians, and we watched in wide-eyed wonder at the instruments and many of the lighting effects being tested. The highlight – of course – was the testing of Jarre’s infamous laser harp, although a small cheer went up when the projectors were turned on for the first time and images from slides appeared dramatically on some of the buildings across the Thames. Small slides became gigantic moving pictures hundreds of feet across as we watched in slack-jawed amazement. And this was just what passed as a sound-check.

It being October – and an overcast evening – night fell fairly quickly, and the usual spoken countdown we were familiar with from footage of Jarre’s previous huge outdoor shows rang out across the PA. We nervously eyed the skies. Intermittent drizzle fell, but nothing too serious. Would the weather hold out? Thankfully, it did – at least until the encore, when the intermittent drizzle because a steady rain and ultimately a biblical downpour. Thankfully, by the time it got serious, the show was over and we were leaving the site. We were crossing a bridge when the heavens properly opened, and we were high enough on the whole spectacle that we barely noticed until we got back onto our Evesham-bound coach and realised that we could probably use a towel apiece.

The show itself, though… even now, words seem hopelessly inadequate to portray just how massive the whole thing seemed to us. The steady metronomic pulse of anvils being struck announced the opening track, Industrial Revolution, from Revolutions, and quickly the album that we had at first been slightly underwhelmed by took on a life of its own. Whether it was the environment in which we were now hearing it, the performance, the spectacle, or just hearing it in the company of fellow Jarre fans I’m still not sure, but I certainly had an epiphany of sorts with the new album that evening. Although it’s still not one of my favourite Jarre albums, I love Revolutions a great deal these days and as my listening has become more eclectic over the years, I can better appreciate the myriad styles and influences that Jarre melded together to make it. On the night, though, Industrial Revolution was just a monster. That the performance of this memorable track was accompanied by dozens of enormous searchlights sweeping around the Docks, fusillades of fireworks detonating in the skies above us, enormous projections lighting up the buildings around the Docks and lasers sweeping through the smoke-filled air all lent the show a strangely dreamlike yet futuristic quality. I think I spent the whole of Industrial Revolution – some 15 minutes plus – agog with wonder, mouth agape, eyes open wide. After that opening volley I had some idea what we were in for, but throughout I found myself turning to say “Whoa!” to Ian every few minutes, laughing in spontaneous delight or just shaking my head in sensory overload. It was this show more than any other that solidified in my mind just how impactful great visuals could be. Music can be immensely powerful on its own, but combine it with effective visuals and that effect can be magnified pretty intensely. I knew Jarre felt that way but I didn’t really understand why until I saw that show. Seeing bands like Pink Floyd and Genesis, and artists like Peter Gabriel and Kate Bush, has sharpened my understanding of how great music and great visuals can enhance each other. It’s a synergy thing.

The show went past in a flurry of highlights. The set was nicely put together – at least one thing from all his albums from Oxygene onwards (I was only vaguely aware at the time that Oxygene wasn’t Jarre’s first record), and featuring many of my personal favourites. I was especially delighted to see Ethnicolor in the set. It’s probably still my favourite Jarre track to this day, and I was beside myself with joy to see it performed in such a grandiose setting. Add in fully half of the Rendez-vous album, Magnetic Fields Part 2, Equinoxe Part 7, Souvenir Of China and new favourites Tokyo Kid, Revolutions and London Kid (complete with guest appearance from Hank Marvin, who popped up again later for a guitar-assisted Fourth Rendez-vous) and my ears were very happy indeed. My eyes, of course, were completely overwhelmed. There was so much going on to my left, to my right, on stage, overhead, that I never knew where to look. We probably all looked like we were watching some bizarre game of tennis featuring ten different players. Fireworks, lasers, projections, searchlights and all sorts of unexpected setpieces conspired to produce a kaleidoscopic spectacle on an enormous scale. On of my favourite effects was so subtle I barely noticed it until halfway through the song it accompanied: midway through the eerie Tokyo Kid, I noticed with a start that the warehouse on the other side of the river, behind the stage to my right, seemed to be on fire; its windows flickering with red light. Naturally, it was just an effect.

My own love affair with Jarre’s music had already begun – in fact it had begun the moment I had first heard Oxygene Part 4 used as the theme tune to the TV show Where There’s Life, although I didn’t realise Jarre was responsible for that until years later – but Destination Docklands was to re-ignite that passion in a big way. Two years later, I saw Jarre for a second time, at his Bastille Day show in Paris, which was in some ways even more special – the weather was sensational, for a start, and it was my first time overseas and the first time I spoke to another human being in a different language outside of a school. That show at La Defense left me agog all over again, as did the show at Wembley Stadium on the Europe In Concert tour in 1993, and all the other Jarre shows I’ve been fortunate to go to. Every one has been special; unexpected, spectacular, and fine showcases for one of the most creative and inventive musicians I’ve been lucky enough to discover.

So whilst it wasn’t my first concert, and whilst I had already fallen in love with Jarre’s extraordinary music, Destination Docklands will always hold a special place in my affections. Yes, the weather wasn’t great; yes, there were all sorts of technical problems; yes, the sound at the site could have been better… But I watch footage of the show now and I am instantly transported to that magical evening 30 years ago, and am besotted all over again with the music, the imagery, and the sheer dizzying creative ambition of it all.

One thought on “The Show They Couldn’t Stop”