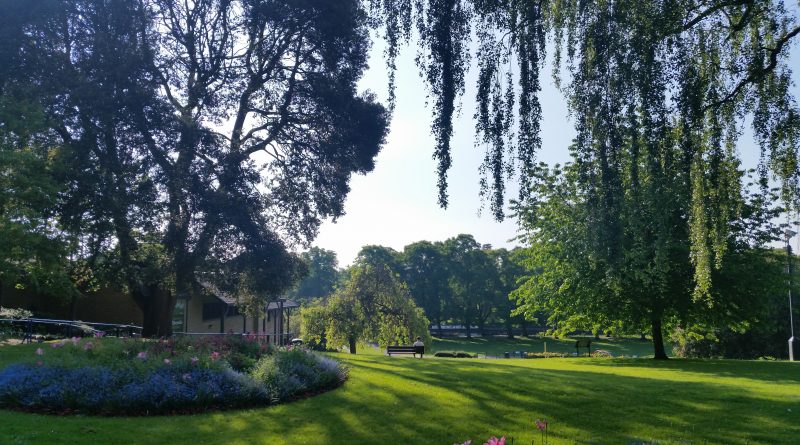 It might be crazy right now, but there are compensations. Here’s something I see on my daily commute to work.

Well, May is turning out to be a bit crazy.

We all have times in our lives where everything seems to be kicking off at once. May 2019 seems to be one of those mini singularities for us, as a number of things we’ve been talking about start unfolding with a momentum of their own, whilst some unexpected things crop up just to make it feel like there are nowhere near enough hours in the day.

The month got off to a rocky start as it became clear that the college where I work would be going through another round of redundancies – the fifth such round of redundancies in five years. If that isn’t indication enough of the contempt the current UK administration have for Further Education, I don’t know what is, especially since many other colleges are similarly having to make very difficult decisions about their provision. I’ve been working at the college for very nearly 24 years now, and it’s been desperately disappointing to watch our provision slowly expand under the Labour government that was in power when I started working there in 1995, only to dramatically contract over the past decade. Years of pay freezes and steadily shrinking funding from the government have demoralised staff, and the broad, varied curriculum we used to offer has naturally had to be dramatically cut back. I don’t think you can underestimate the effect that a college such as ours can have in a small, semi-rural town, and I’m torn between disappointment for the staff and empathy for the young people (in particular) and adults who now often have to travel further to secure the provision they want, or simply pass it up.

We’re in the midst of consultation right now, so we won’t know which staff are at risk until the beginning of June. I may or may not be surplus to requirements at that point. To be honest, after literally years of this stuff happening all the time, I’m kind of numb to it all. I’m not exactly sitting and freaking out about it, but, understandably I think, the redundancies are hovering overhead like the proverbial sword of Damocles. As it is, one of my co-workers has decided to jump ship and is leaving for a new job – so there’s already a bittersweet feeling that the fairly close-knit team that was formed following the college’s merger in 2016 is starting to split apart.

At the same time, Steen – who has been teaching counselling at the college for a full year now, part-time in the evening, has been busily pushing forward expansions to the college’s counselling provision, and this is starting to bear fruit. She’s been teaching two nights a week for the full academic year – that’s on top of her work at one of the local schools and her own private counselling practice, mind – and it’s been a very busy but rewarding time for her. Just this week she’s heard that she will be able to teach a higher level counselling course next year, and she’s looking forward to taking students who passed their counselling qualifications this year up a level. Steen’s also somehow found time to take a formal teaching qualification at the college this year, so whilst it’s all been very busy it’s been a very positive year for her. Not just at the college, either – her private practice continues to go from strength to strength, and her work at the school is less fraught these days, thanks to a sympathetic line manager who has given her the freedom to drop a day from her working week at the college, giving her some time to decompress and/or complete work for her private practice. She’s always really busy, but there’s no question that she’s really enjoying her work these days.

There’s also the question of moving the premises of her private practice (and that of her practice partner, Helen). After a string of disappointments regarding their existing property, they’ve recently decided to up sticks in the summer once their lease expires and move onto the high street in town, just a stone’s throw from Hippy Towers. A more modern building, closer to home, with quieter neighbours and a little more room, for quite a bit less rent each month? It sounds impossible, and yet that’s exactly what they’ve found. They’ll be moving their offices in August, once we get back from the USA.

Oh yeah – the USA. When Steen and I got married, we promised we’d go back to the US and see her folks every year. Needless to say, transatlantic flights don’t get any cheaper, especially for those of us who work in education(!), so we had to rapidly re-evaluate the feasibility of that idea. Eventually we opted to go over every other year, which has been working well, even if it wasn’t ideal. We went to the US last year, and after a little soul searching, have decided to go back again this year: Steen’s changed working life and the flexibility of my position have meant that we’re not stuck flying at the weekend – when everything is always so much more expensive – and after a very busy year, we’re looking forward to a bit of off-grid time with Steen’s folks and old friends who inexplicably seem to be fond enough of us to drive for hours to hang out. It’s a chance to recharge our batteries before what looks set to be a properly mental autumn, and we’re really looking forward to it.

Amidst all this, Steen had a birthday, my mum’s about to have one, I’m continuing my driving lessons (although I did skip last week, thanks to a nasty head cold passed to me by my driving instructor – cheers, mate), work on the first issue of New Light magazine continues apace, in readiness for its planned launch at the end of the month, we both renewed our passports… Every day is a parade of Things That Need To Be Done, yesterday if possible. Somehow we’ve also made time to visit our friends Ann & Tony and I’ve crammed in writing a few thousand words of my novel (still untitled at the moment).

Tell you what, it’s going to be properly good when June arrives and – hopefully – all this stuff will be starting to wind down. I’ll know what’s going on at work – and frankly, knowing what the outcome is for us all will be a blessed relief, whatever that outcome happens to be – and Steen will be finishing her evening teaching for the summer. The first issue of New Light should be complete, too – and hopefully we can set aside this hectic period and cool our jets a little. We both enjoy being busy, and having lots to sink our teeth into, but the kind of pace we’ve been running at this month can’t be sustained indefinitely, as we’ve found to our cost in the past. It’s time to take a breath.