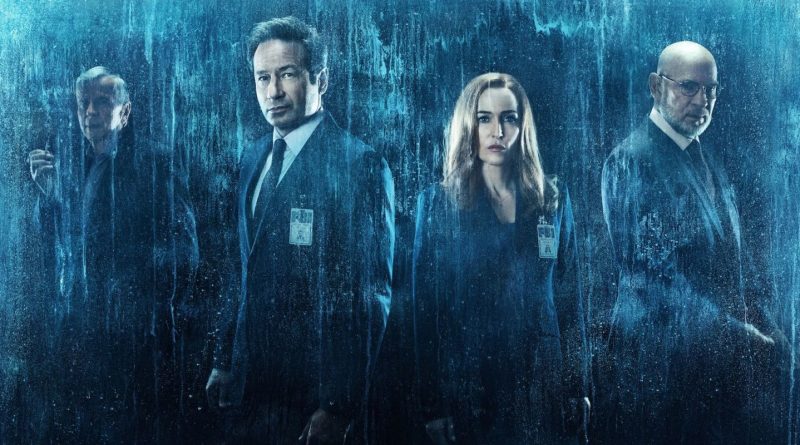 Last night I watched what may be the last ever episode of The X-Files. If you haven’t seen it, please be aware that what follows contains spoilers, although I’ve avoided being too specific where I can.

I usually cite The X-Files as my favourite TV series. I think that’s still true. Shows come along once in a while that I adore, but usually when I measure them against the yardstick of The X-Files, they end up falling just short. Buffy The Vampire Slayer, Twin Peaks, Star Trek: Deep Space Nine, the re-booted Battlestar Galactica and Chris Carter’s own Millennium are probably the shows that have got closest to equalling The X-Files incredible variety and consistency.

One of The X-Files greatest attributes for me is its ability to present entirely different kinds of episodes from week to week, and this year’s season 11 has proven as inventive and unpredictable as any of the show’s previous seasons. From the madcap, never-more-than-a-few-seconds-from-a-gag comedy of The Lost Art Of Forehead Sweat, to the almost dialogue-free Rm9sbG93ZXJz, and from the tense and deadly earnest My Struggle III and My Struggle IV to the more traditional police-procedural-with-a-twist of Familiar, the show has continued to delight in the unexpected.

I never thought we’d get any more new episodes of the show when it was cancelled at the end of its ninth season back in 2002 – and I wasn’t sure we’d get any new feature films in the wake of the poorly-received I Want To Believe in 2008 (I really liked it, for what it’s worth, but it wasn’t at all what I was expecting or was originally hoping for – and I suspect that the majority of the critical reviews of the film were born of similar feelings). So it was with considerable delight that I heard that the show was returning to the small screen for a tenth season, albeit with a much-reduced episode count. I tuned in, actually expecting to be somewhat underwhelmed after such a long absence, but the show immediately managed to suck me in and by the end of that six-episode run I was fully back on board. Consequently I was very excited when the eleventh season was green-lit. This was immediately tempered by quiet despair when Gillian Anderson made it very clear that this was to be her last season playing central character Agent Dana Scully.

This was a bitter pill to swallow. For me, The X-Files has very much been Scully’s journey from hardened sceptic to (often reluctant) believer in many of the strange and (literally) alien things of whose reality David Duchovny’s Agent Fox Mulder was firmly convinced. The partnership between the two agents was so beautifully drawn that inevitably they were drawn together personally as well as professionally, something creator Chris Carter fought quietly against every inch of the way – not without good cause, because as he has pointed out and as has been patently obvious elsewhere, when central characters become personally involved it tends to erode and ultimately destroy the fine balance of ensemble shows. Years of will-they-won’t-they tension were addressed in increasingly strange and unpredictable ways. Somehow Carter and the writers kept the relationship credible without having the agents stop to smooch at the end of every episode. When Mulder was abducted, it was Scully that became the focus of the show in a very tangible way. The idea of The X-Files continuing without her seemed unthinkable. Even Carter was moved to repeat several times in interviews as the season began to air that he had “no interest” in continuing to make the show without both Anderson and Duchovny on board. So it was with a certain amount of sadness that I began watching the new season of the show.

It’s clear that some fans have felt short-changed by events this year, most obviously in that the majority of the episodes have been stand-alone stories that did not address the apocalyptic alien colonisation mythology arc that the show has dangled temptingly in front of audiences for a very long time now. Many fans just want that plot line resolved, and anything else is just a distraction. Carter in particular has received a great deal of criticism for a perceived inability to maintain a logical and consistent thread through the increasingly complex mythology story. Personally I think he’s done a pretty impressive job, given that some of the unpredictable twists and turns the mythology has taken have been due to the absence of key actors and the struggle to maintain consistency with what has already been demonstrated to be true on-screen. There’s also an argument that if the mythology arc was all tied up neatly, the central mystique of the show – the very thing that keeps it fresh and keeps the stakes for Mulder & Scully so high – would suffer. Not to mention that this is a show that thrives on not tying anything up neatly. I feel that Carter did a great job tying up loose threads with his two mythology arc stories this season. At first I was a bit uneasy about the way the events of last season’s finale were explained away, but it didn’t take me long to get swallowed up in the machinations of the antagonists, new and old; and what I watched last night richly rewarded my patience. The way that Mulder and Scully’s child (not that he was, exactly) William became the lynchpin around which the mythology arc began to coalesce once more was very nicely done, and the season – possibly series – finale was wonderfully tense, a succession of confrontations, explanations, chases and shocks that served up a much more effective finale than the ninth season had served up some 16 years earlier. Mulder and Scully got much more effective closure than they had back then, and the episode managed to both clear the board of many of its remaining pieces and simultaneously keep their fates unresolved.

And so the question is now being asked of Carter, the network, and indeed the cast: is it possible that we’ve not seen the end of The X-Files after all? Interviews with Carter over the past week seem to indicate that there is cause for some cautious hope. Assuming the network is interested to see where the series could go, in its present guise, or in some new iteration – The X-Files: The Next Generation, if you will – then all we can do is wait and see. For all my deep and abiding love for Scully (and Anderson herself), the idea of The X-Files without Dana Scully – or indeed any of the other long-established characters – doesn’t fill me with horror. In a way, the season finale leaves me feeling that we’ve now seen Mulder and Scully’s story, and have been given a way to leave the events of the show behind them; a way to escape and to live their lives in peace, or at least what passes for it in The X-Files universe. Perhaps it is only right that the X-Files themselves are picked up by a new agent or agents with something to prove, as Mulder himself picked them up in the early nineties. Who knows where the various loose threads left by the series would lead if they were tugged on anew? I actually find that an exciting and intriguing prospect.

Here’s hoping that I’m not the only one. Much as the Mulder/Scully dynamic has been so wonderful to watch evolving, and much as at times it has been what defines the show and has made it so compelling, ultimately the premise of the show is bigger than any one character – or pair of characters. Our attention has to rest on the contents of Mulder’s carefully archived X-Files. Whether we get to see their adventures on-screen or not, I feel sure that someone in the world of The X-Files will feel strongly, as Mulder did and his allies came to, that these cases that defy explanation cannot just be locked away and forgotten.