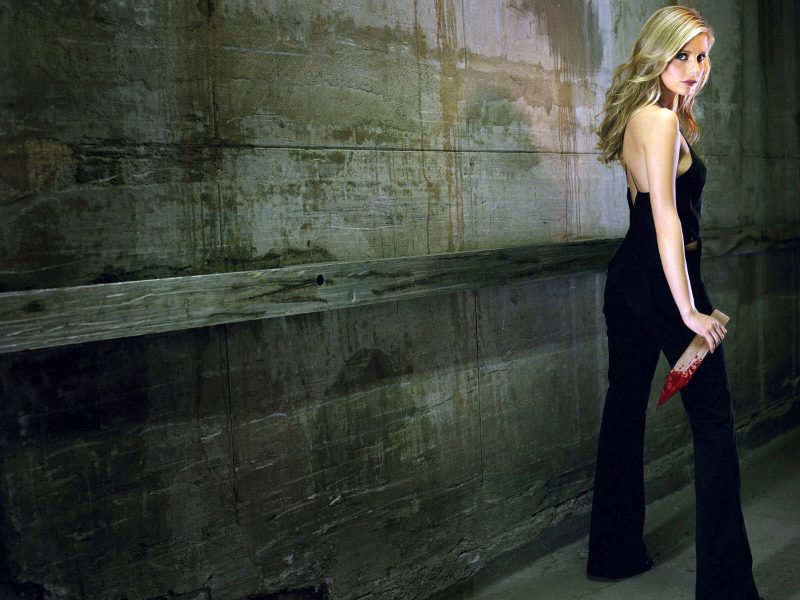 I can’t quite believe it, but Joss Whedon’s wonderful Buffy The Vampire Slayer is 20 years old this week.

I’m not at all sure what I expected when I heard that Whedon was making a TV series out of the concept underpinning the 1992 film Buffy The Vampire Slayer. I remember seeing that film a few months after its release and being thoroughly underwhelmed. I thought the concept – essentially, that a high school cheerleader had been born into the role of ‘The Chosen One’, destined to defend the world against the depredations of the supernatural – was kooky fun, but although the film raised a few chuckles it was all a bit too B-movie for its own good.

So when I noticed the show had been imported from the US courtesy of the BBC, I wasn’t especially interested at first. The fact that the show had been gifted an early evening dinner-time slot didn’t bode well to my mind, either. I had visions of a show very similar to the film: a kitschy semi-sitcom affair with little in the way of character development, hokey effects and limp, uninvolving scripts. Indeed, a few episodes had already aired by the time I found myself switching over to watch an episode, in a spirit of “Ah, what the hell, I feel like something lightweight and fluffy for an hour.”

I was not at all prepared for what I saw.

It was just so much sharper, all round. The dialogue was quick-moving, witty and loaded with jokes and pop culture references – not to mention the ‘Whedon-speak’ slang used by most of the characters, which rapidly became endearing and entertaining all on its own; the cast were superb, too – there was immediately a sense of a connection and symbiosis between everyone that made a huge difference. The writing, too, was a great deal more subtle, and I was surprised how much I got behind the characters in the space of one episode. The effects, too, were a huge improvement on the film, making it all feel a great deal more rooted in reality. Add in Nerf Herder’s immortal theme tune and I thoroughly enjoyed myself. I actually felt sad when it was over. The episode in question was Out Of Mind, Out Of Sight – by the time I started watching, the first season of the show was almost over. When the season finale aired the following week, I was already kicking myself for taking so long to give the show a chance. When the second season started airing, I was there from the start. Not long after it started to air, the first season was released on video, which was a day-one mandatory purchase. I binge-watched that first season over the course of a weekend, and finally felt properly abreast of all things Buffy. I would record each week’s new episode and watch it perhaps half a dozen times, by which time the next episode would be broadcast – and so it went on. By this time I was – as you can tell – a diehard Buffy fan.

So much has been written about the show during and after it’s seven-year run – not bad for a show that almost everyone felt sure at the time would never make it to a second season – that it’s hard to feel that anything I could write about it would be something that people haven’t heard a million times, but here I am, trying, anyway. I’ve seen very few TV series that were written as well as Buffy was. Watching each new season was like being strapped to a rocket. Many shows write to a formula, or write ‘bottle shows’, where little or nothing has changed significantly for the characters when you compare the situation at the start of an episode and the situation at the end. Buffy dispensed with that attitude very early on, gleefully killing off cast members, introducing new ones, pitting friends against each other, turning established characters on their head in fascinating ways – the tangled webs of relationships between the characters was a feature from early on in the show’s run, and made for compelling viewing. The show was also ruthlessly serialized: although many (not all) episodes featured a self-contained threat, every season served up a new long-running challenge for Buffy and her band of allies. Episodes frequently turned up story elements from previous shows, so watching regularly made the viewer aware of a whole slew of subtexts and plot devices that more casual viewers would miss altogether. Finally, in its last three seasons, the show dispensed with self-contained episodes altogether, and essentially served up 22-hour long films, split into hour long chunks. The writing never flagged: it was always so inventive. The cast and crew made 144 episodes in all, and whilst some are obviously more impressive than others, I don’t think they ever made a bad episode. That’s practically unheard of.

Great though the writing was, without such a great cast, the show couldn’t have become the enormous success that it was. To a man and woman, the cast were absolutely amazing. The extended cast of Buffy is still the gold standard for an ensemble cast for me: their chemistry was remarkable, even early on, and naturally enough things only improved over time, as the cast grew into their characters and the histories of those characters informed their performances. Sarah Michelle Gellar’s Buffy Summers was an incredible creation: one of the great flawed heroes. Amazing as she was, it was her relationships with the other characters that made the show work. Everyone was so well-drawn, from the shy Willow; the class clown Xander; Queen Bitch Cordelia; the brooding Angel; the madcap ex-Vengeance Demon Anya; the bookish Watcher, Giles; the wonderfully sarcastic British vampire Spike; not to mention the numerous others that cropped up over time. Great characters, played, without exception, brilliantly. The voyages of personal development all these characters went on were wonderful to watch – and Buffy always managed to get me to feel for the villains as well as the heroes. Some episodes were almost totally focused on one character, but never failed to hold your attention, whoever was being featured.

When the series started, Buffy Summers was in High School. Seven years later, we’d watched Buffy and her friends literally and figuratively grow up before our eyes. They faced every kind of challenge along the way, many of them not even remotely supernatural. I had been there every step of the way, and I loved them all. So when the stakes were raised substantially in the latter years of the show and characters I had known for some time started to die, and the characters left behind had to deal with that fact, the show carried some serious emotional weight. The show broke every character at some point: had them face up to unacceptable things about themselves or their friends and loved ones that led to some hugely emotional pay-offs.

I think, more than any of the other shows I’ve watched and enjoyed in my time, Buffy is the show that is the most misunderstood by the people who haven’t watched it. I’ve happened across very, very few people who have given Buffy a chance and haven’t warmed to it, but still many of those who haven’t watched it feel that it must be some kitschy teen soap with PG-rated comedy vampires. In the wake of the Twilight franchise, the people holding that opinion only seem to be further entrenched in it. I can understand where that feeling comes from, because – as I mentioned above – that’s exactly how I thought of the show… before I actually watched it.

As Buffy’s 20th anniversary celebrations continue and the show is fondly remembered by legions of fans – and a still-besotted cast and crew – my hope is that some of the sceptical onlookers are moved to give it a try and discover just what an incredible show it is. I’ve deliberately not included any real spoilers in this blog entry; as with any show, the real joy is in not knowing what’s coming. That said, Buffy remains one of the most endlessly re-watchable shows I’ve ever seen, and you can be sure I’ll be indulging in the pleasure of a repeat viewing in the near future. It’s been a while now, and the anniversary feels like the perfect excuse. Not that one is ever needed for a show this creatively successful.

Yes, there are vampires, and ghouls, ghosts, witches, demons and who knows what else. Yes, there are magical scrolls, eldritch books and monsters. There are also detentions, relationship problems, sexual awakenings, hangovers, bad hair, misunderstandings both comic and tragic, deaths, births, sacrifices and great joy. All of life – and death – is here. If you’ve seen the show, then you know why I love it so much. If you haven’t… well, better late than never.

Happy Birthday, Buffy. I hope someone got you cake. Thank you for 20 years.